I dunno, I go do a thing and not some things and I guess there's some sort of new level of dickery about a local creek. So like, I read more and it appears that there's a guy who's parents actually named him "Glade Squires."

I mean, don't get me wrong, "Squires" is pretty badass as far as names go. I mean you've got.. what, a popular misspelling of a guitar manufacter and Chris Squire, who played a guitar but is only singularly named, and not plural. Actually, I guess "Squires" isn't very cool at all, other than the q.

So duder's some sort of guy of importance in the fish commission, and now he's all hot to stock local creeks in strange new ways:

Commissioner Glade Squires, of Chester County, suggested the commission stock the creek within the park boundaries with rainbow trout and allow all-tackle fishing for them specifically. The commission could maintain the existing trophy trout rules in regards to brown trout, he said.

Such a change makes sense because Saucon Creek represents “a significant opportunity” to provide fishing in an urban setting for families, he added.

So, I guess that's an idea.

And holy shit, did we even talk about the name "Glades?" Who names their fucking kid "Glades?"  How goddamned douchey is that name? Can I say that without it being libel or something? Anyways, Glades. Holy crap.

So, yeah. Glades has strange and awful ideas. He also had support from people with far more common names. These are the people who are responsible for our shitty sport continuing, and fuck knows Saucon Creek has enough problems without crap like that; like the coop hatchery the local mouthbreathers keep trying to open on the banks of this place, a hatchery that ole Glades was also in support of.

So, I dunno. Maybe it's not the place you go, but the thing is if it starts in one shitty stream in my backyard how do you know the next one won't be in yours? http://fishandboat.com/inform.htm

Holy shit, lehigh valley local topical shit and what not. 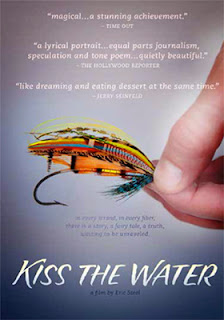 Them there local TU types along with some sort of artsy shit thing here in the Valley are bringing one of them there fancy fly fishin' kinda movies in for the townies.

The fine people at Monocacy TU have a full article here, but the short of it is on December 17th, they'll be presenting "Kiss the Water," a documentary (I guess) about reknowned (I guess) salmon fly tier Megan Boyd.

OK, so there's not much I can go on there... Deal with it. How about I parrot more copy from the PR campaign for the film, itself?

Oh fuck that, I don't know. I saw shit about movie festivals I never heard of, and all sorts of nonsense. It doesn't matter. You know what does matter... The fact that someone is doing something of note about our little sport in the third largest metropolitan area of Pennsylvania that somehow has no fucking presence or note at all in the larger fishing community. I mean, seriously, how much of that sort of thing actually happens here? None. None at all. We live in a fucking black hole of that sort of thing despite the fact that you'd think those fly fishing film tours should swing right the fuck through here.. I'm not sure I ever need to see the latest and greatest gopro'd hero shots of someone's fishing trip in Timbuktu, but fuckall if I wouldn't at least like the option to say "no" to that nonsense.

So how about you take $10 out of your wallet and head down to the Artsquest building on the 17th and watch this shit? Think of it, you'll get 80 minutes or so of entertainment in the middle of an otherwise shitty cold season of little to no fishing and a lot of holiday assholery.. Furthermore, the more of us who show up at this, the more likely someone will do this again, and furthermore, the money they raise goes to shore up the shitty state of our local streams.

Its win all around. You win. Our blasted landscape wins. The people putting this on win. Winning!

Shit starts at 6pm; a pre-game warmup if you will, with the local fry frishing champions out in force doing what we do best (presumably standing around, orating and issuing grandiose statements on the superiority of fly fishing over gear; you know there's gonna be some tweed up in that bitch).

But sometimes it can turns out OK.

Fucking off the CWA, historians, and a select population of stringer janglers.

Thanks in no small part to the efforts of the Monocacy Creek TU Chapter, the City of Bethlehem, and the many people who are responsible for the festering sore of shit known as Musikfest (coz flooding is bad for business, and you know they cried about it endlessly, lost revenue, etc etc etc; Money is our God), the dam in Johnson Park along Monocacy Creek is now gone.

Actually, it has been for awhile now. I just don't care to do updates because, honestly, this is pretty lame and I realize now. Not "this" the dam removal, "this" a ridiculous egocentric blog wherein I tell you all about whatever shit I've done gone and bought (that'll be the next few installments).

Anyways, let's get on with the good bits. I tried to be useful, and tried to take some before/after pictures, and figure we'll just post them because that is interesting.

That said, lemme specify when I say "I tried," I sort of forgot to take more corresponding pictures of further up the damed section, which was basically a long, slow, flat and shitty pool unsuitable for anything other than the poor bastard stockies which hadn't been slaughtered, some fat carp, and more ducks than you'd know what to do with.

Now, however, about two weeks after the breaching, and after the work crews have completed and moved on there's some great riffles, some holding water, and the newfound ability of fish to move further up the creek rather than be stuck at a lowhead dam and able to be murdered easily by the creeling masses of the greater Bethlehem area. Ha ha, fuck you and work for it, assholes.

So, after the cut, way more fucking pictures of things that aren't very important to most people, including alot of very-nearly-the-same perspective pictures.

Other shit to read: